On Sunday, NASCAR driver Ross Chastain made history with an unprecedented wall-riding maneuver that qualified him for a championship race and set the record for the fastest lap on the track at 18.845 seconds. Remarkably, Chastain said he learned the move playing NASCAR 2005 on the Nintendo GameCube when he was a kid.

The maneuver happened at the Xfinity 500 race hosted at Martinsville Speedway in Ridgeway, Virginia. Martinsville is a half-mile short track built in 1947 that is well known for its tight, shallow-banked turns that usually require heavy braking to negotiate.

During the final lap of the race, Chastain found himself in 10th place but needed to pick up two positions to earn enough points to qualify for the Championship race on November 6. Instead of slowing down on the turn, Chastain shifted into fifth gear and gunned it, riding the outside wall and passing five cars to finish the race in fith place.

Ross Chastain hit the NOS button to make it to the championship over Denny @rubbinisracing pic.twitter.com/XyDBXyj5wD

In a post-race interview with NBC Sports, Chastain said, "I played a lot of NASCAR 2005 on the GameCube with Chad [Chastain's brother] growing up, and you can get away with it, and I never knew if it would actually work. I did that when I was 8 years old."

The game Chastain is referring to is likely NASCAR 2005: Chase For the Cup , released in September 2004 for GameCube. Chastain, born in December 1992, would have been 12 at the time. To check out the technique, we ran NASCAR 2005 in the Dolphin emulator on a PC, selected the Martinsville track where Chastain pulled off his move, and rode the wall. It is indeed possible in the game, although it takes a great deal of skill and a little luck to use the technique to pull ahead as Chastain did.

Ross Chastain explains his GameCube inspiration in a post-race interview.

To understand the advantage of Chastain's move, a little knowledge of racing physics comes in handy. Typically, when taking a tight turn on a racetrack, drivers brake to counteract forces that push their cars toward the outside of the track. This braking action dramatically slows them down on the turn. This time, instead of slowing down for the turn, Chastain kept his car in fifth gear, hugged the wall, let go of the wheel, and allowed the wall to hold his car in place—no brakes necessary. That's how he passed five cars and set a 75-year lap record. 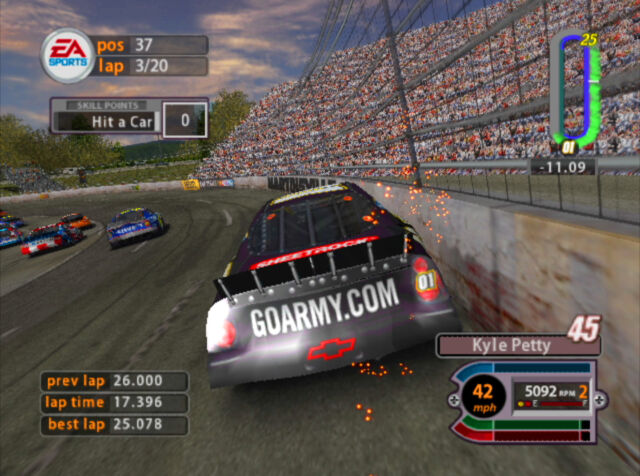 Ars scientists re-created Chastain's wall-riding move in NASCAR 2005 for GameCube. It slows you down and damages your car, but under the right circumstances, it could provide an advantage. (credit: Benj Edwards / Ars Technica)

Of course, a move like that comes at a cost, which is probably why it hasn't been tried—at least not successfully —until now. Chastain faced guaranteed damage to the finish of his car from scraping the wall and potentially catastrophic failure if his car happened to hit a protruding obstruction. "Once I got against the wall, I basically let go of the wheel and just hoped I didn't catch the turn four access gate or something crazy," Chastain said, "But I was willing to do it."

For now, the racing world is equal parts amazed , surprised , and even a little worried that Chastain's move might become a regular technique going forward. For now, Chastain likely appreciates the attention as he prepares for the Championship on November 6—thanks to the Nintendo GameCube.