Since this weekend was a holiday, and today is Tax Day in the US, we're reaching back into the archives for this classic that fits the theme. Original -- Remy 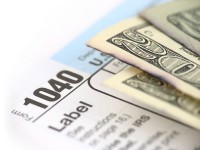 Before Curtis even got to sit down at his desk, he was accosted by a frenzied, sweating junior developer. "OhmygodCurtis," he began. Curtis extended his hand in a "calm the hell down" gesture and allowed him to continue. "A whole bunch of our stores had no data posted last night and I'm not sure why orwhat to doabout it or whoIshouldtalktoand-" Curtis gestured again, to which the developer handed him a thin stack of papers. After a deep breath, the developer continued. "It's a list of the stores that didn't post last night."

The stores in question were part of what we'll call Hewitt & Liberty Block – a reasonably large tax preparation company serving a handful of states with over 2,000 retail locations. Each of the locations was set up to post tax data and sales records to the central computer at the main facility. According to Curtis's list of stores that hadn't posted any data, it was nearly 1/4. It was going to be a long day.

The change control staff repeatedly insisted that while yes, there had been some changes the previous night, they were all properly documented and had gone through the appropriate process. Specifically, a minor firewall change, a database was moved to a different server, and a few stale DNS entries for servers that no longer existed were removed.

Curtis made a few more calls to make sure that the staff was able to get online where necessary, and strangely, all of the stores that hadn't posted any data were able to access the web, while the ones that did post data weren't. Curtis grilled the managers at several of the locations, asking if anyone was there to inspect the equipment, who the ISP was, what connection type they used, which gradually made it clearer – all of the locations on his list used broadband.

So he'd found the common thread, but still, what the hell? Did the software have some kind of built-in mechanism to verify the upload speed and deny it if it was too fast? No, because it wasn't a problem yesterday. Could the "small firewall change" have affected this? Well, no, because most of the locations posted their data correctly, and all stores used the same port. Perhaps the stale DNS entries that got deleted?

In the change logging system, Curtis found the list of DNS entries that had been removed. With a quick search, he found a reference to one of the entries in a utility function. In pseudocode:

And it's not just a coincidence that there's no check for "Reply from x.x.x.x...", as this function was, crazily, written to check against a server that had never even existed. It would simply fail.

Of course, management decided that this was the system admins' fault, for deleting the stale DNS entry. They should've known better!